At the beginning of June, I got a last minute call to cover the San Antonio Spurs and Oklahoma City Thunder in game 4 of the playoffs. I’m not stretching when I say last minute… I had just finished a run at the lake when my editor called and said that the scheduled second shooter wasn’t able to make it, and I was the closest person. It’s a 3.5 hours drive from Fayetteville, tip-off was a 7, I hadn’t showered or packed…. and it was 2 o’clock. Luckily I arrived about an hour little before tip-off.

I had the second shooter position, which meant that I couldn’t shoot from the floor, and having arrived so late I hadn’t had much time to scout out locations. Normally I would arrive to a game with several hours to spare so that I could become familiar with the arena and have time to relax before shooting. Since this wasn’t the case, I felt like I spent too much time negotiating the crowd trying to find “the spot.” I finally got comfortable and started to concentrate on shooting.

The whole experience was a good learning one. It was my first time to shoot an NBA game, and I look forward to anything that comes my way in the future. I’ve been shooting sports for over a decade, and it was a funny feeling to walk into somewhere and feel like a rookie after so many years. I think that’s why I like my job so much. No matter how much experience I’ve gained over the years, I am always faced with new, unfamiliar situations that I have to push through to produce my best.

US PRESSWIRE IMAGES FROM THE GAME 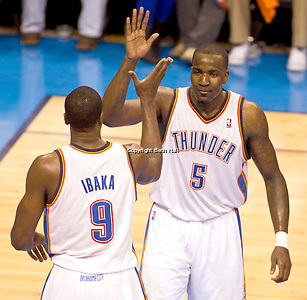