I was asked to photograph Emmanuel Gardinier, general manager of 21C Hotel in Bentonville, Ark., for an editorial publication. Because I have photographed him before, I started to wonder what I could do differently for this photo shoot.

My thought process made me think about all of the social media photos I’ve seen of the green penguins at the hotel. My friends have posted some pretty hilarious things, and I wondered what else was out there. A google images search turned up the laughter, and turned on the ideas. A lot of the images I found were the penguins in real life situations: in bed, using the bathroom, taking a shower, etc.

I started to think about putting Emmanuel in a real life situation with the penguins, and I tried to imagine how they might interact while working. For one of my ideas, I wanted a row of penguins with Emmaunel in the center at the same height.  I visualized them as an army ready to serve those that walked into the hotel.

The process of creating a photo doesn’t always make sense, but it is fun to have an idea and make it come to life. It’s also nice to have a willing subject and an editor who’s open to anything. 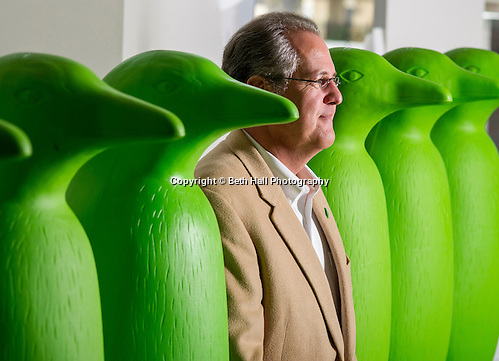