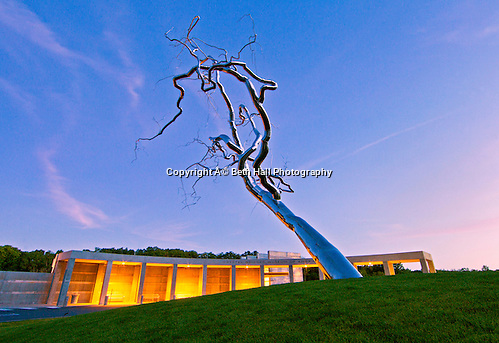 At the end of May, I received an inquiry email from an editor at National Geographic Traveler wondering if I would be interested in shooting an assignment for them.

I wonder if anyone ever says no?

After all, it seems like almost every photographer says they want to shoot for National Geographic when they grow up… and I was honored to get the chance to shoot for one of their publications.

I was given the assignment to photograph Crystal Bridges Museum of American Art in Bentonville, Arkansas. I was asked to shoot art, galleries, interiors and exteriors of the museum. The trickiest one was the exterior because the museum doesn’t have a grand entrance like one would expect. Ok, it’s grand with the sculpture Yield, by Roxy Paine, but the building sits at the base of a natural ravine in the heart of the Ozarks. You don’t see the series of pavilions that are built around two creek-fed ponds until you ride the elevator down and walk into the museum. It was designed by world-renound architect Moshe Safdie, and saying that it’s a gem in Northwest Arkansas is an understatement. I know that I am supposed to be unbiased as a photojournalist, but as a resident of Northwest Arkansas, I’m grateful to museum founder, and Wal-Mart Stores, Inc., heiress, Alice Walton. I graduated from the University of Arkansas with a degree in Art, so I’m pretty excited to have a place to take my 7-year-old and hopefully pass along my enthusiasm for art.

My shoot for the magazine was for a new series called, “Best of the World.” I spent a lot of time at the museum waiting for the light to be perfect, and I was lucky enough to have one day with a beautiful blue sky. I’m so thankful for the museum being more than accommodating to my requests to photograph galleries, and photograph the entrance at dawn. I had a lot of fun looking at the architecture and galleries, but I had the best time just being creative. I really enjoyed being me…. over the years I’ve learned that I am most comfortable when I am behind a camera, or when I’m with my son. Through this assignment, I had the best of both worlds when I took my son on the Art Trail and photographed him in Skyspace by artist James Turrell.

I really enjoyed working for National Geographic Traveler, and am looking forward to photographing another “Best of the World” this month.

[photoshelter-gallery g_id=”G0000bXE7CWLCHcM” g_name=”Crystal-Bridges-Museum” f_show_caption=”t” f_show_slidenum=”t” img_title=”casc” pho_credit=”iptc” f_link=”t” f_send_to_friend_btn=”t” f_fullscreen=”t” f_show_watermark=”t” f_htmllinks=”t” f_mtrx=”t” fsvis=”f” width=”800″ height=”600″ bgcolor=”#AAAAAA” bgtrans=”t” btype=”old” bcolor=”#AAAAAA” crop=”f” trans=”sweep” tbs=”5000″ f_ap=”t” linkdest=”c” f_constrain=”f” twoup=”f” f_topbar=”f” f_bbar=”f” f_bbarbig=”” f_enable_embed_btn=”f” f_smooth=”f” f_up=”f” target=”_self” ]
P.S. Just a little fact I learned about myself while photographing the exterior… apparently I can run a lot faster than I thought I could. I was able to add a little light (by flash) to the tree and the front of the building during a 30 second exposure. I’m sure I provided some entertainment for the security guard that morning at dawn! 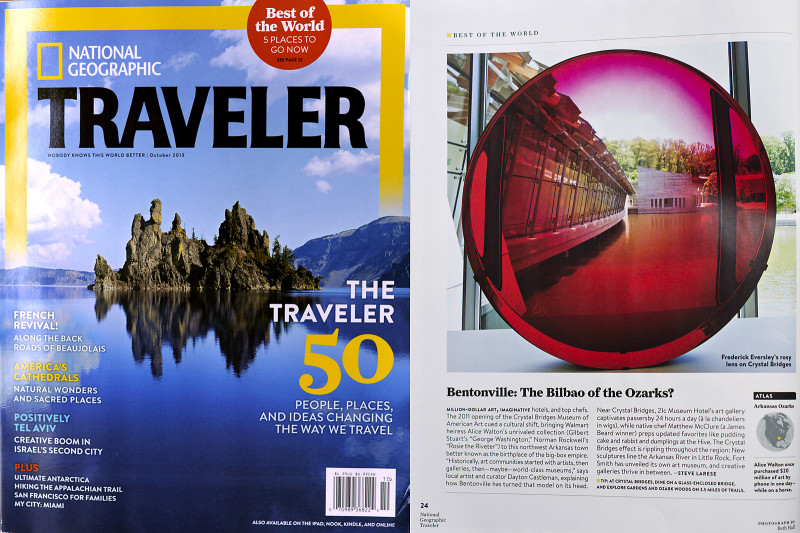 How exciting! What a great opportunity and your photos turned out amazing. They definitely chose the right photographer for the job. Congrats!