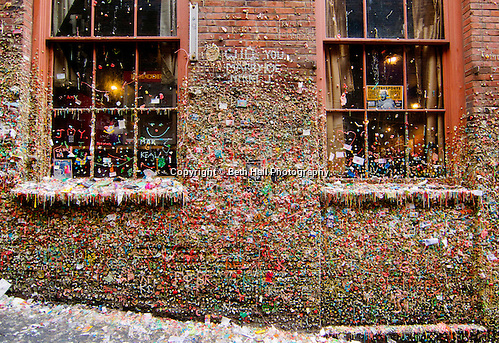 I recently took a trip to the Northwest corner of the United States. The trip was nothing more than a vacation, and a chance to shoot some stock photography. I’ve been debating how to show my work from the trip, so I’ve decided to break it down into small posts from the different areas we visited.

I thought I would start with the gum wall in Seattle, since it was recently mentioned in a conversation. We were visiting the Pike Place Market when I saw a postcard featuring the wall. I did a quick google search and realized that it was just around the corner, so we had to visit. (When I say we, I traveled with Wesley Hitt… another Arkansas photographer)

The wall began in 1993 when patrons of the Market Theater stuck gum to the wall and placed coins in the gum blobs.  The walls were scraped clean twice before theater workers gave up, then market officials declared the wall a tourist attraction around 1999.

It has been named one of the five germiest tourist attractions in the world, second to the Blarney Stone. The wall is covered in gum 15 feet high for 50 feet, and parts of the wall are covered with several inches of gum.

The wall was very interesting, but I was more entertained by the people and how they interacted with the wall. Some were afraid, some were repulsed and some were brave. One man posed for a photo under a windowsill as he acted like he was going to catch the long drip of gum that was now dangling above his open mouth.

If you visit the Pike Place Market, it’s well worth a stop by the gum wall in Post Alley. I would take your mom’s advice on the visit and say “look, but don’t touch.” 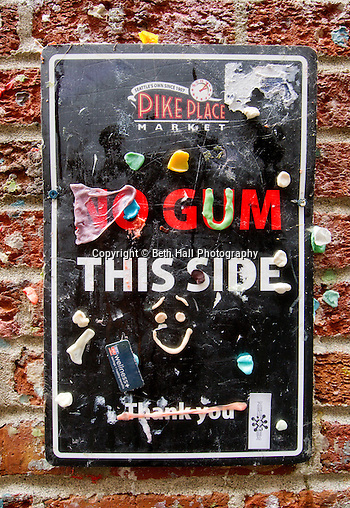