As I began my day reading about Ryan Mallett’s release from the Houston Texans, I flashed back to a moment from a game in 2010.

As sports photographers, we have a split second to capture images that tell a story. There are so many factors that affect this, and many times moments are missed or only captured by one photographer. While we are shooting, we are dealing with so many things on the sidelines that can come between us and our moment. I have taken countless frames of fans, referees, the chain gang, coaches and players instead the moment that I had intended all because someone walked in front of my lens. 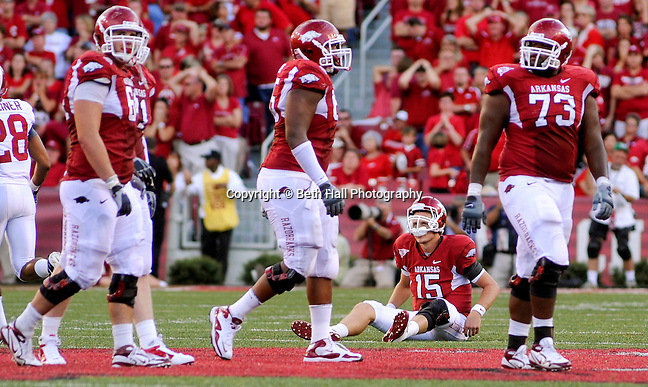 This is a moment that stands out in my mind. It was taken during the Alabama vs. Arkansas football game in 2010. In this moment, Ryan Mallett looks defeated. He is sitting on the field, disheveled, with his blue eyes looking to his O-Line. This is the moment that followed the play where he “threw away the Heisman,” as I overhead someone say after the game.

I vaguely remember the play, an interception, but I remember this shot. I remember seeing him sit, I remember watching the players walk in front of him and part just enough for me to see him, and then I remember him looking up. “click”

Images are interesting things because they tell the story… the story of what needs to be told, and maybe not what is actually happening. I don’t know what he is thinking here, I don’t know why he is looking at his teammates and I don’t know why they are walking away and not helping him up. The only thing I know about this image is that it tells the story of 24-20 loss to Alabama.